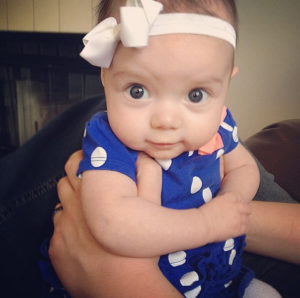 This little peanut is 7 months. For those that have followed along via social media and/or this blog, you’ve seen the progression from early pregnancy to birth to now 7 months old. All I can say is that she is hitting milestones earlier than we ever would have imagined. She started rolling at 3 1/2 months, holding her bottle at 5 months, sitting up at 6 months andshe’s now on the verge of crawling.

So, when people ask me if I’d recommend BabyPlus to my friends, my answer is a most certain yes! I LOVE what BabyPlus has done for my daughter. Not only has she been hitting milestones early, but she is the most calm and joyful baby I’ve ever met. If you want to hear from more parents who have used BabyPlus, visit our website. Have questions? Let us know!

The post Ahead of the Game appeared first on blog.babyplus.com.

Okay, so there really isn’t much to share here except the cuteness of my child. Now I know every mom thinks their baby is the cutest thing in the world, and I’m no exception. I will say that I am already so proud of my little girl in so many ways. She brings such happiness to so many people and it’s incredible to see! Here’s a few pictures from her first photo shoot, I hope they make you smile too! I’m one happy BabyPlus momma!

We love reading the positive reviews that come in through our email, social media (Facebook and Twitter accounts) and our retail sites. Here’s one of the newest reviews we received:

I purchased the BabyPlus Prenatal Education System over 7 years ago when I was pregnant with my first child. Everything about my son’s behavior was/is consistent with the claims the manufacturer makes regarding the effectiveness of the system. From birth, he slept absolutely every night (he would awaken at precisely 3:00 a.m.., without crying, for his nighttime feeding, and then he would go right back to sleep). He never had trouble nursing. Not sure if that is a result of BabyPlus, but he had no need for something to soothe him, such as a pacifier. He literally NEVER used a pacifier. He was rarely fussy (during the day, he always wanted to be outside and if I didn’t take him outside, even as a newborn infant, THEN he would become fussy!) He consistently has a cheerful disposition. At a very young age, my husband and I, along with extended family members (including my mother who is an educator) were amazed at his advanced sense of humor. At a very young age, he also showed a remarkable ability to infer meaning. His behavior is consistently on a more mature level than other children- even compared to other children that are first born or the only child in their family. In spite of this, he makes friends easily. Currently, he is in the second grade and reads on a 5th to 6th grade level. The little guy learns so rapidly it amazes me! I am so convinced the BabyPlus system played a part in his development that I bought another one for my second pregnancy. -Leanne

If that wasn’t enough, here’s another:

Used this throughout my pregnancy and loved the results. Baby nursed very easily within an hour of birth. She has hit milestones very early and is very alert and observant. She has slept extremely well and is very good natured. Will definitely use again for any future pregnancies! -Ellie

Do you have a review for us? Leave a comment below or email us at customerservice@babyplus.com.